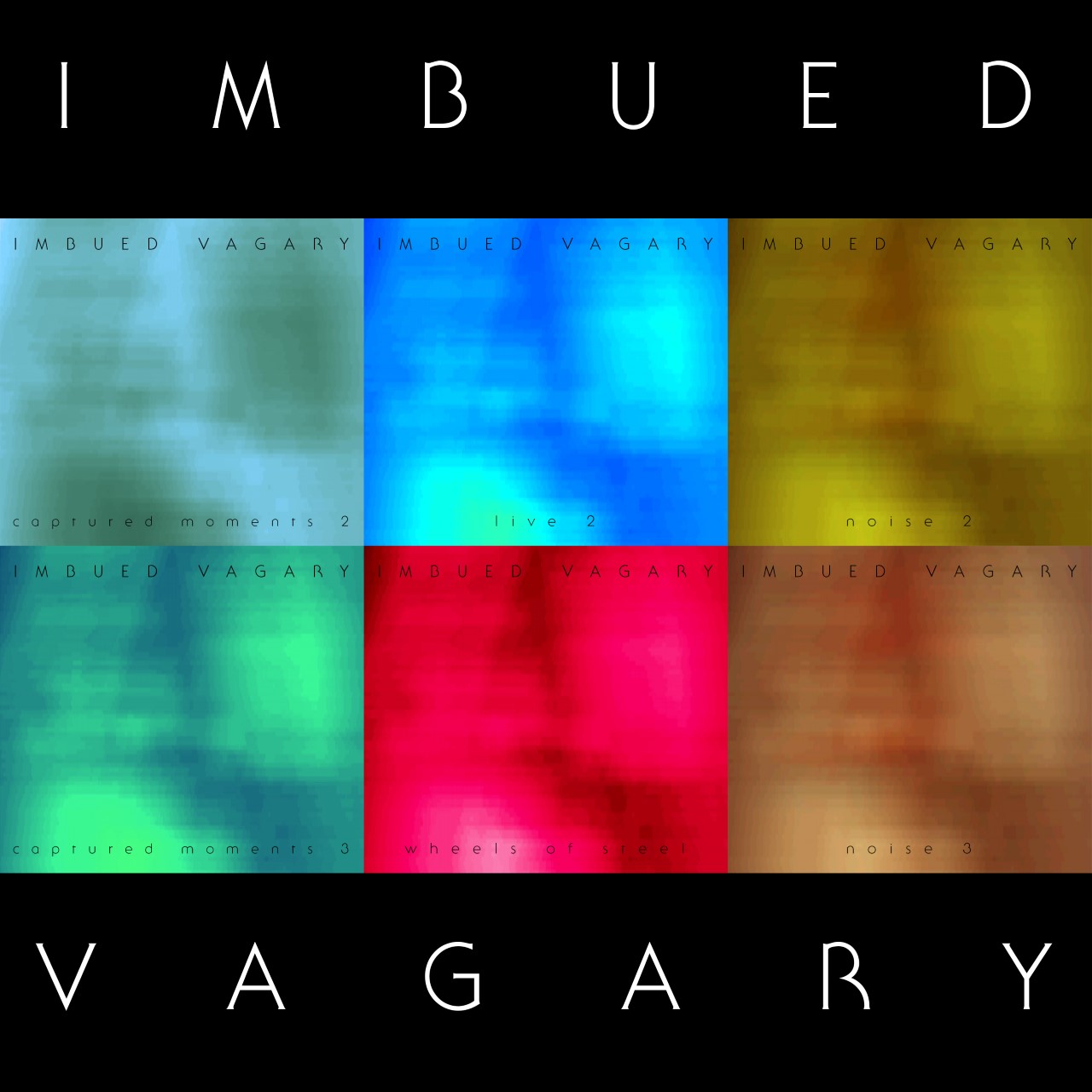 Philadelphia-based electronic band IMBUED VAGARY has released an ambitious 6-album project called Hexalogy. The highly-inventive, genre-pushing group have made the set available both digitally in addition to limited edition CD formats. Albums are also available individually or can be bought as a set.

Originally a minimalist side project from Industrial electro-terrorists, Any Questions?, IMBUED VAGARY coalesced into being in 1989 as an outlet for the electronic experiments and sonic soundscapes that core members Ttam Troll (electronics and electronic percussion) and mC2p4 (electronics) produced which didn’t fit the Any Questions? mold.  Since those early days, IMBUED VAGARY have morphed and traveled through many incarnations and now lives on as a musical collective of like minded musicians whose purpose is to explore new musical realms and technologies.

IMBUED VAGARY – Hexalogy is a 6 CD collection of new music from IMBUED VAGARY.  Clocking in with over 6 1/2 hours of electronic experiments and sonic soundscapes, it features the following…

Captured Moments 2 (FISHCD015) – In categorizing ones own projects, a template of sorts begins to emerge.  One of those is this series.  IMBUED VAGARY is proud to present to you a collection of musicians as well as a collection of “captured moments”.  In this case, the second in a series.  Just as the name implies, these are moments of raw electronic improvisation, complete with all the “imperfections” one would expect from such an endeavor.  Concepts thought up and run with on the spur of the moment.   Captured moments of time in an overall fabric of synthesized space.

Live 2 (FISHCD016) – The first Live release in this series was the result of live performances that showcased the symbiotic relationship of men and machines in concert.  A mix of melodically inspired themes but with the non-traditional bent that makes all IMBUED VAGARY performances special.  This second Live release features three in-studio performances and one outdoor concert performance that highlights the IMBUED VAGARY Collective across multiple sonic environments.

Noise 2 (FISHCD017) – IMBUED VAGARY is no stranger to brutal electronics.  This second installment of extreme music in the Noise series showcases the harsher side of our Floating Fish Studios Synth Jam live improv sessions and live concert performances. Synthesis, sampling, and special effects meld together to form these harsh and noisy sonic experiments.  As we warned on the first Noise release, “Hold on… This ride gets bumpy!”

Wheels of Steel (FISHCD018) – IMBUED VAGARY continues to assimilate new members into its fold and as it does so, it expands the Collective’s musical (and nonmusical) acumen.  The sonic experiments on Wheels of Steel highlights such an expansion and showcases the turntablism of Paul Doppelganga.  Combined with the electronic soundscapes that IMBUED VAGARY are known for, an exciting and unique form of electronic music emerges.

Captured Moments 3 (FISHCD019) – This third installment in the Captured Moments series goes deeper into the dark pools of the electronic ocean.  Journey into the tidal pools of sonic delight and wallow in the electronic surf created by various subsets of The IMBUED VAGARY Collective.  These captured moments may well have you humming some sinister melodies as you submerge yourself.

Noise 3 (FISHCD020) – Presented here as the third release in our Noise series are a set of performance rehearsals, we had for the 05/21/16 Experimental Music/Noise show in Pittsburgh, PA.  The planned exercise was to single out a set of hardware synthesizers for use in this specific performance environment.  Though some may think of something related to a rehearsal and/or named “noise” should be relegated to the cutting room floor, IMBUED VAGARY takes our rehearsals and “noise” very seriously.  Rehearsing with lights, lasers, and fog, we want to ensure our own peak awareness of the experience that we plan to share with our audience.  Of course, we record all of these moments.  The recordings for this release are taken from camcorder mono audio tracks so the quality is not as good as what would be expected from an IMBUED VAGARY release, but you do get to hear the fog machine belching out smoke during the recording.  That should make up for the “lesser” quality recording.  Shouldn’t it?