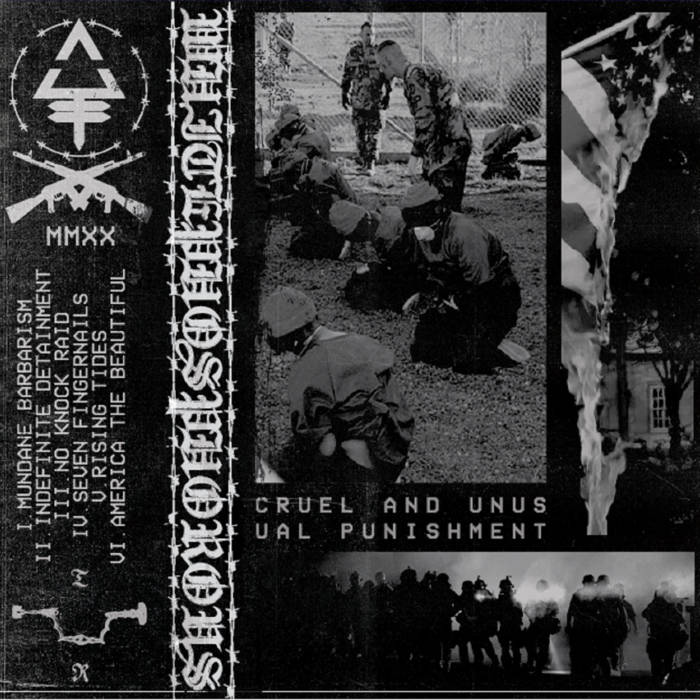 Using found vocal samples and narration in the harsh noise arena is something I’ve always been a fan of.  There is plenty of that in today’s offering which stands at around the 15 minute mark.  Cruel And Unusual Punishment is the latest release from Whitephosphorous on Trepanation Recordings.

The release starts out with some faint static pops like some distant gunfire or bombs a few miles ahead…this, against a periodic industrial smash like a team of military trucks carrying artillery.  After that… we enter sonic destruction in the vein of Demonologists with manipulated static waves laden with effects, pulsating and pausing only long enough to provide a bit of haunting narration.  What follows is disrupted municipal sounds like police sirens and sounds of the city streets and more static manipulation from the artist.  The effects on the narration almost give a bit of an apocalyptic, “big brother” effect guiding the listener through the destruction or soon-to-be barren landscape.  It’s unclear in some of the voices if they are original or samples, which is nice because it doesn’t ruin the listener experience with context.  It adds to the effect.  Furthermore about 8 minutes into the recording, an almost paranoid or schizophrenic effect is made with the overlaying of different voices on top of a static plane.

The release then ends on a similar note as it began, as a noise-riddled tale with bookends of low-key death industrial soundscapes.

There are some interesting things going on in this EP.  Available on ltd. CD and digital formats.  Definitely for fans of noise and death industrial soundscapes.