Something is brewing in the northeastern United States.  Whether it’s the industrial/metal hybrid of Machine Man Records or an obscure noise artist under the name Nightmare Park… something is happening.

Initially we were intrigued by Nightmare Park’s side project Failure To Appear because of the “rain ritual” tracks that actually sounded like a brutal rainstorm even though they were harsh noise walls.  So we are pleased to dive a little further here and we thank Nightmare Park for their time.  Nightmare Park is the product of one Devlin K.

You have a couple of different projects listed on yr. Bandcamp – Nightmare Park and Failure to Appear.  Can you tell us the difference, if any between the two (i.e. motivation, focus, equipment etc.)?

Hello, and thanks so much for your interest in my work!

Yes, I have several projects on Bandcamp; Nightmare Park, my Horror-based HNW project, BLACK RABBIT TAXI, my industrial noise/Literary Noise project, MANEATING ANTEATER, my purely power electronics project, and Failure To Appear, my ANW/HNW/Soundtrack/Whatever I feel like project.. I use all the same gear for all of them, however, BLACK RABBIT TAXI was my earliest project, and it was primarily based in apps on my phone, back when I didn’t really know what I was doing.. And MANEATING ANTEATER is full of lo-fi power electronics, and has the added detraction of my heavily distorted vocals.

When did you first become interested in the noise field and who were some of your earliest interests.

I have been interested in noise/noise rock for a long time. I’ve always been a fan of bands that let their songs degenerate into pure chaotic noise; as for the first ‘proper’ noise I got into, I heard Whitehouses’ ‘Birdseed’ album around the time that I heard THE RITA’s ‘Sea Wolf Leviathan’ and Werewolf Jerusalem’s ‘Host Of The Flies’, and I’m still blown away by all of those records.. Just the aesthetics and abrasive textures on those records are amazing to me, still..

You have a number of releases on Bandcamp that have the theme of rituals; “Black Hole Rituals,” “Reanimation Rituals” and “Dagon Rituals” for example.  You also have the “Rain Rituals” tracks on the Shwarz Nacht album.  How important is ritual to you in creation or is it simply an interest in terms of themes?

Yes, you’re referring to my Failure To Appear project, which I began as an alternative to the straightforward (as I see it) and rigidly structured idea of HNW. I fully believe that making music of any kind has an element of ritual to it, in the sense that you’re practicing motions to achieve a desired result, and also that you want to elicit a response from another person based on that result. Also, thematically speaking, I try to use samples from things that will impart the sense of immersion in an occult rite or practice, to  develop a certain sense of unease or tension in the listener.

How has your equipment evolved over the course of your discography?

Well, when I first started making noise, I didn’t really think anyone else would like it, and I was just making it on an app on my phone that was basically a complex digital oscillator that I then used as a basis for layering multiple tracks on top of each other; very primitive and time consuming.. Now, I use a series of distortion pedals, source sounds from horror films, Audacity on my laptop, and a Bastl Kastle as a sound source to fill things in where needed.

Are the “themes” of your releases just basically interests or within these albums do you incorporate relative samples or field recordings?

Sorry, I already kind of anwsered that, I think. I have always been very interested in horror films (as with Nightmare Park); with my original project BLACK RABBIT TAXI, I focused on horror in literature, as I felt at the time that the abstract and subjective nature of reading horror lent itself to the imagination in a similar way to listening to noise.

I’ve noticed that horror movies and shows are of particular interest to you.  How do you think that, utilizing noise, you or anyone else can create a soundtrack whereby we might identify the source of inspiration?

I can’t speak to others’ imagination, but I can say that even with mainstream cinema and television, you always have recognizable auditory cues as far as plot development and inciting a ‘startle’ from the audience, and what I attempt to do with Nightmare Park in particular, is to prolong that tension and aesthetic feel to a nearly unbearable degree.. Of course, some people (like myself), enjoy harsh noise, so it might be soothing to them, which is perfectly acceptable to me as well.

What dynamics do you think that draw people to noise?

I think that people are drawn to noise, in general, for a great variety of reasons; disgust with the current state of music, a need to push their own personal boundaries, the allure of feeling like you’ve discovered something exclusive, ect.

Are there any particular releases of yours that you are especially proud of?

I love my latest work the most, in general; otherwise there wouldn’t be much point in continuing, would there? But I am particularly fond of several Nightmare Park releases: ‘Spider Baby’, ‘The last Man On Earth’, ‘High Tension’, as well as some of my BLACK RABBIT TAXI records, namely ‘Split 5’ (with These Gaping Jaws,) ‘Split with Werewolf Jerusalem’, and ‘Dissappear Here’.

You’ve received a large commission to create and perform one of the most sonically abrasive, violent noise works.  You’ll probably have to pay for the stage speakers that you’ll be destroying.  What artists do you try to out-do in terms of being abrasive and what do you use to create this piece?

I honestly wouldn’t try to out-do anyone, I’d just do my set, and whatever happened, happened. Vomir can gain hordes of legion fans by simply pressing a button and laying flat on the floor for an hour, versus an act that drives a bulldozer through the back wall of the venue.. In the end, either what you do will resonate with an audience, or it won’t, and theatrics or oneupsmanship will only get you so far.

Many many years down the road, a very distant relative locates a box in the attic of an old home.  Inside the box they find a Nightmare Park album and something to play it on.  This is a noise piece so they may not understand anything about your particular legacy.  But what would you like them to learn about the art of noise creation in general?

I’d hope that they understand that it’s not as easy to create as it might sound to the casual listener. I am lucky to be in contact with some amazing artists with amazing projects; that put tons of time and effort, literal blood, sweat and tears, into creating the sounds that they create, like: Train Cemetary, Gouger, Gvillotina, She Walks Crooked, Werewolf Jerusalem, Black Matter Phantasm, James Shearman, ect. And many, many others, too, all great musicians, all amazing at what they do.

I would like to say thank you to everyone that has inspired me, and everyone that may gain inspiration from my work, and to Noise Beneath The Snow, for granting me this interview. 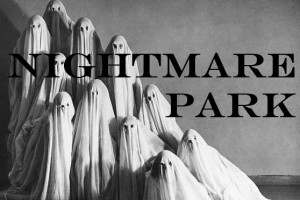 Here’s a link to the review we did for Nightmare Park’s side project: