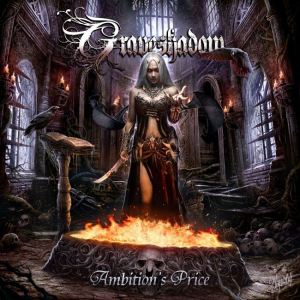 It takes a mere few seconds to realize why Heather Michele’s vocals are borderline addictive to listen to.  Why?

She’s real.  Sound strange?  How many dime-a-dozen female-fronted metal bands exist today only maintain a sound that is over-produced, too-symphonic, or put too much attention on the singer or any combination of thereof?  The answer is “too many.”

Ambition’s Price is the new album from Graveshadow due out on April 13.  11 emotion-powered cuts with “Widow And The Raven Master” leading the charge.  Check out the lyric video below.  Most of the cuts on the album are fairly mid-paced.  “Gates,” however is a powerful, slightly slower track that gives Heather’s vocals room to greet the skies while the background contains a transition between clean and heavy guitars.  Catchy hooks and an ulta-powerful chorus make “Gates” a definite highlight of the album and something to hope for in the live set.  There’s a little bit of Arch Enemy influence in the chorus with the death metal style growls.

The album was produced and mixed by Armand John Anthony (Night Demon, The Fucking Wrath, Gygax), and mastered by Colin Davis at Imperial Mastering.  Mr. Anthony and Mr. Davis really bring out the best in this band.  The album is perfectly balanced and blends the band in a manner that (unlike some bands/producers) highlights all the musicianship without over-emphasizing the singer.  Granted…, Heather Michelle has a pretty distinct voice.  That’s a given.  But everyone shines here.  Graveshadow is a band born from universal metal and lyrical themes we all know and love.  In other words, her vocals soar, but musically, the band is down-to-earth and solid as a whole.

Surely fans of bands such as Amaranthe, Epica, Nightwish, Sirenia and so on will find something to love here in Ambition’s Price.  There’s really not a bad moment on the album.  Those who were hooked by their well known track “Lycan Lust” from the Nocturnal Resurrection album, will find plenty of reasons to get hooked on the tracks on this one.

Looking forward to seeing them on the road hopefully soon……  http://www.graveshadow.com/events

Ambition’s Price, which will be released April 13, 2018 on the GRAVESHADOW’s new label M-Theory Audio